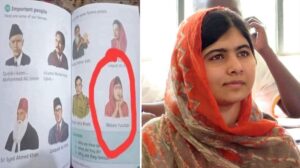 Here is burning news on social media and almost on all platforms. The Punjab Curriculum and Textbook Board ordered to seize the social study books for 7th grade. The new version of social study books for the coming seven grades was published by the OUP (Oxford University Press) this year. The published book earned criticism from everywhere regarding the picture of MALALA YOUSAFZAI alongside the national hero of Pakistan MAJOR AZIZ BHATTI SHAHEED.

The main stimulus and trigger of this criticism have been started from the public end and parent side in receiving books. The aim of the Government to introduce a single national curriculum earned a great deal of criticism because of publishing Malala Yousaf Zai’s picture in the book. Social media and all other media highly criticize this act of being published the picture of Malala Yousaf Zai in the social study book of grade 7th.

The level of criticism from the public end led the Government to seize all the books quickly. There are many raids are made by Police, PCTB, and many other agencies at OUP in the Gulberg, Mini Market & confiscated the book stock. The officials have shown the letter to the media regarding the publishing of this book. There is no certificate or letter has been issued by the official to release the book in the market as No Objection Certificate had not been issued.

There are some rumors that the book material has been submitted to the PCTB for review; however, there is no publishing certificate has been issued by the officials to release it (Dawn.com). “The Oxford University Press published the book without any NOC,” he said.

He said that PCTB, Police, and other agencies visited the shops and check the orders to seizing of the social study book. This was an illegal and unauthorized act of being published books without NOC (By The Punjab Textbook Board). The Punjab Textbook Board had ordered to bane 100 textbooks due to unethical and illegal published material related to “Two Nation Theory”.